Here is a track called "pipe music" that I contributed to an album that was organized by Glen Branca. 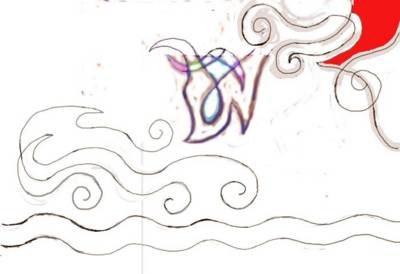 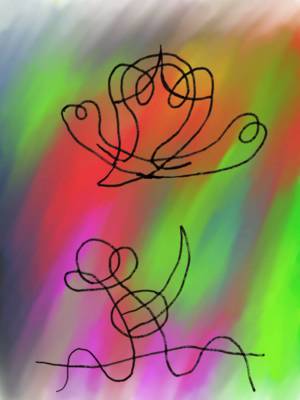 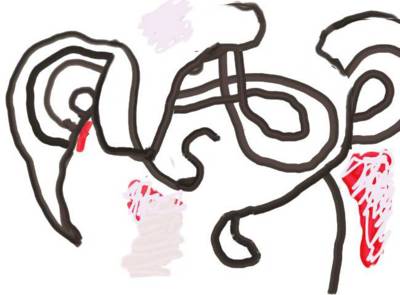 Here is a link to the Art of Aron Fra Kangeq 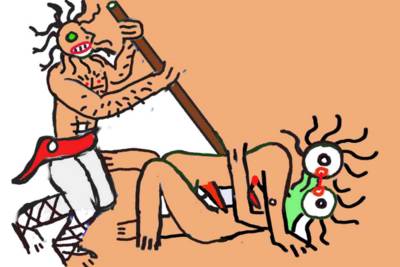 Zimri And Cozbi Murdered by Phinehas

Then an Israelite man brought to his family a Midianite woman right before the eyes of Moses and the whole assembly of Israel while they were weeping at the entrance to the Tent of Meeting. 7 When Phinehas son of Eleazar, the son of Aaron, the priest, saw this, he left the assembly, took a spear in his hand 8 and followed the Israelite into the tent. He drove the spear through both of them-through the Israelite and into the woman's body. Then the plague against the Israelites was stopped; 9 but those who died in the plague numbered 24,000.
10 The LORD said to Moses, 11 "Phinehas son of Eleazar, the son of Aaron, the priest, has turned my anger away from the Israelites; for he was as zealous as I am for my honor among them, so that in my zeal I did not put an end to them. 12 Therefore tell him I am making my covenant of peace with him. 13 He and his descendants will have a covenant of a lasting priesthood, because he was zealous for the honor of his God and made atonement for the Israelites."
14 The name of the Israelite who was killed with the Midianite woman was Zimri son of Salu, the leader of a Simeonite family. 15 And the name of the Midianite woman who was put to death was Cozbi daughter of Zur, a tribal chief of a Midianite family.
16 The LORD said to Moses, 17 "Treat the Midianites as enemies and kill them, 18 because they treated you as enemies when they deceived you in the affair of Peor and their sister Cozbi, the daughter of a Midianite leader, the woman who was killed when the plague came as a result of Peor." 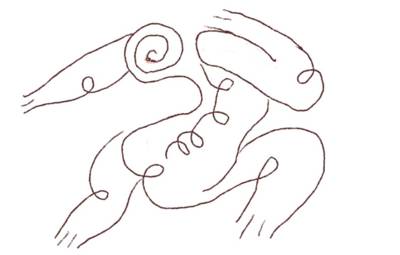 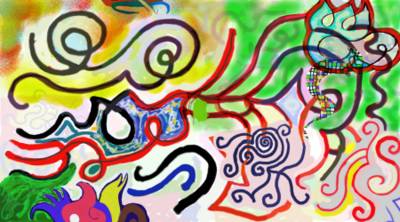 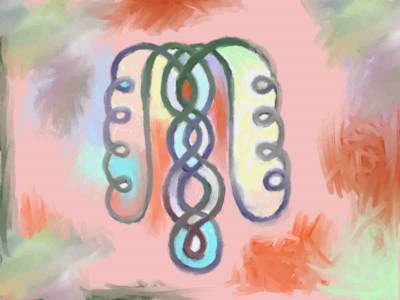 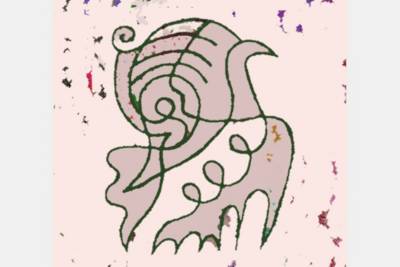 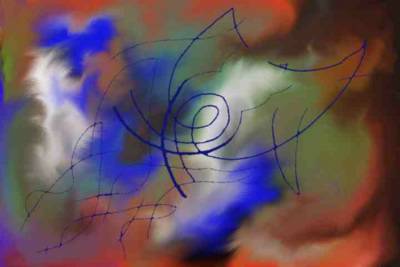 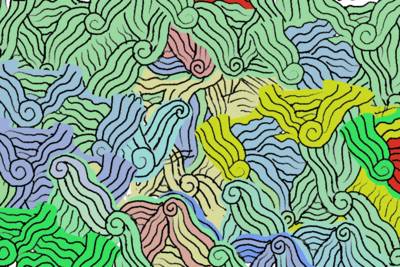 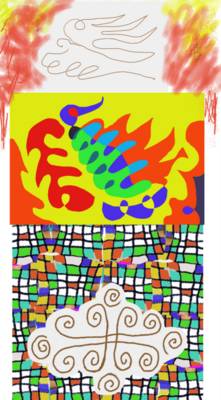 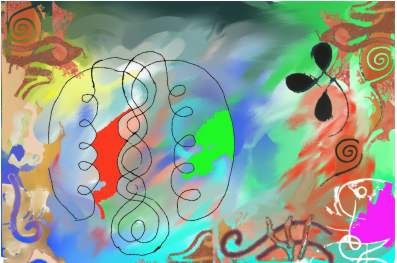 Light before the rising moon 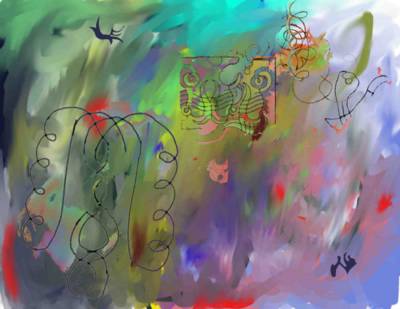 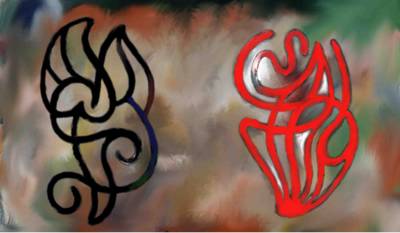 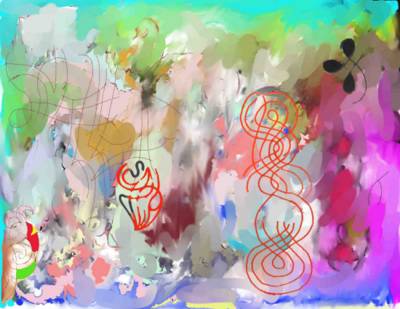 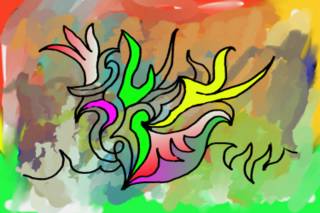 The Maize God Eats a Rooster 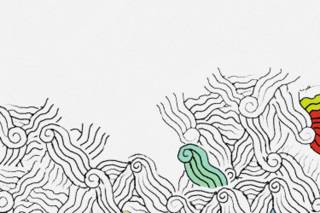 One of my water series

Graven images
Cyber Paintings by Harry Spitz
e-mail: h.spitz@juno.com
web: http://albums.photo.epson.com/j/AlbumList?u=4187799
I think of my paintings as icons or totems derived from biological forms. Each image is conceived whole in the mind and performed (written) and refined on canvas, paper, plaster or computer screen.
The Kayak Roll (http://www.qajaqusa.org/QK/rolls/rolls.html) is one of those skills that can change ones sense of oneself. Learning to roll can be terrifying. One has to purposely capsize ones boat, then use the paddle to grip the surface, you use your hips and knees to flip the boat right side up, then you bring your body out of the water and finally the head comes up last. This head up last maneuver is counter-intuitive; after all we all want to bring our heads out of the water first. No matter how well the novice understands the principles of rolling (intellectually) most people try to roll with a tremendous effort applied to the paddle, then they try to wrench themselves out of the water head first. Of course this means that the roll won't work and this improper form could even dislocate a shoulder.
I make my art with the same type of visual, muscle memory that is used in the Kayak Roll. I also find a similarity with the sweeping curves used in the roll and the sweeping curves in the gestural marks that I use in my work. My paintings are hieroglyphs that tell visceral stories. I believe that there are archetypal images that are part of our beings. We are attracted to the shapes and colors of ripe fruits and women's bodies. We are repelled by sharp teeth and snake shapes. I believe that these archetypes are wired into our brains and are basically part of our beings. I am trying to find these icons within myself and use them as keys to unlock the visual depository.

1969 -1973 attended the Philadelphia College of Art where I had the privilege of studying with Raphael Ferrer and Robert Keyser.

1973 - 1976 Moved to San Francisco where I showed in The Mostly Flowers Gallery and Postcard Museum, The Lawson Gallery and The Nanny Goat Hill Gallery.

1978 won a National Endowment for the Arts.
Co-founder (with G. H. Hovagimyan) of the 75 Warren Street Project, New York

1980 One of the early members of ABC NoRio. I organized and participated in the “Positive Show”
Played Sledge hammer on Glen Branca's Lesson #1.
Performed “Pipe Music” on the mega Album “Just Another Asshole” Click on http://www.towerrecords.com/product.aspx?pfid=1034712 to hear a clip.

1981 – Ceased showing my work publicly. (Continued to work privately)
1989- Purchased my first kayak.
1996- Built a Guillemot stripper Kayak.
1998- Took a paddling class from Derek Hutchinson (the great British paddler)
2002- Built a Aleut Baidarka (a traditional Aleut kayak) http://www.canoeworld.org/baidarka1.html
Started showing my work on-line at Ted Knerr’s Art Spirit site http://www.art-spirit.net/ (click on Walls gallery)
2003- Honed my paddling skills by taking some classes and working as a teacher’s assistant at the New York Kayak Company http://www.nykayak.com/
Attained my BCU (British Canoe Union) 4 Star Rating (sort of a brown belt for kayakers)
2003- Joined Ted Knerr’s Walls Gallery at http://www.art-spirit.net
2004- Led a group of 28 paddlers from the Downtown Boat House to the first legal landing of kayaks on Governors Island in recorded history.
2004- Showed in Jeffrey's Meat Market in the Essex Market at Essex and Delancey St. in NYC and The Motza Files on Rivington Street.

Started posting my work on line at on an Epson Photo site.
posted by Harry Spitz  # 11:53 AM 3 Comments